If you're new to USC, you might want to check out the Step-by-Step Tutorial, too!

USC is a per player turn-based game, which means that players (including the AI) take turns in a pre-defined order, and when active, they may move every and all of their units. This is called a player's active turn, inside which the order of units to act with is completely up to the player, and they may even switch “forth and back” between units, following a carefully planned strategy, adapting to action results.

The “amount of action” (movement, combat, interacting with objects, etc.) a single unit can perform in a turn is measured in Action Points (AP). Based on their Stamina and a few possible minor circumstances, a unit, in general, has 15-25 APs per turn. Different actions cost different amount of APs.

The following table summarizes the most general AP costs (without specific skill bonuses):

* have moved at least 3 / 5 grids consequently

The map (the area where a mission takes place) is made up from grids. A single grid can always contain only one so-called “full-grid entity”; full-grid entities are units, objects (crates, barrels, servers etc.), and walls (including closed doors). In “real world terms”, a grid is about 1,5×1,5 metres in size; in game terms, it is the smallest unit of space. Standard-sized maps are 32×32 grids large. In USC, maps are flat (2D), have no elevation data. 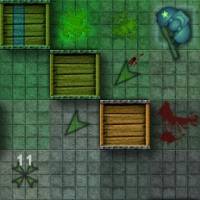 Under general conditions, a unit can move one grid for 1 Action Point (the only exception is being “tranquilized”) in any of the 8 directions. When moving diagonally, side obstacles are ignored (see picture to the left).

After moving, a unit always faces the direction it was moving to. Turning, on the other hand, does not cost any APs and can be performed indefinitely.

In USC, every entity – be it a wall, a crate, or a unit – has a prime attribute called Health (HP) (or “Integrity” for objects). Direct or indirect damage from attacks, and in the case of living units, a few other hazards (bleeding, rad poisoning, etc.) reduce the current Health. If it ever reaches 0, the entity is dead/destroyed. Units can be healed back to their maximum Health.

Damage from bleeding, poisoning, or burning is always applied to a unit at the beginning of its player's turn. Regeneration, if available, is applied before this damage, possibly preventing the unit from dying to these causes.

Another important prime attribute is Morale (MP). It measures the general psychical condition of a unit. Whenever something “bad” happens to the unit – it gets attacked or hurt, loses a comrade, etc. – the Morale drops, while “good” events – being healed, damaging, or killing an enemy, etc. – raises it. Just like Health, Morale has a maximum value specific to the actual unit. For Commandos, this value is equal to the level of the Morale skill, which is capped at 100. Aliens don't have a measurable “Morale” attribute but may react differently to various situations.

A low Morale (below 20) may have unpleasant consequences, from being unable to perform an action to panicking or even going berserk. The greater the unit's max. Morale is, the smaller the chance such a thing happens.

The table below shows the minimum current MP values of specific actions:

* these actions can be performed even with 0 MPs

The following table shows the effects of various events on Morale (may be cumulative):

The chance of Morale loss when being attacked or damaged is reduced to 1:6-5:6 on difficulties lower than ULTIMATE, respectively.

Armor Rating (AR) or Damage Threshold (DT) is the fourth prime attribute of every entity in USC. It will be discussed in detail in the Combat section. In general, Armor decreases all incoming damage by its current value. Attacks and “hazards” (e.g. corrosion) may damage the Armor Rating. Commandos have a standard base Armor Rating of 25, which can be upgraded via items to 50. Tougher aliens may also have heavy armor. Some special objects/walls may have 200+ AR, which practically renders them (almost) invulnerable.

→ Next Units in Detail

← Back to Main page